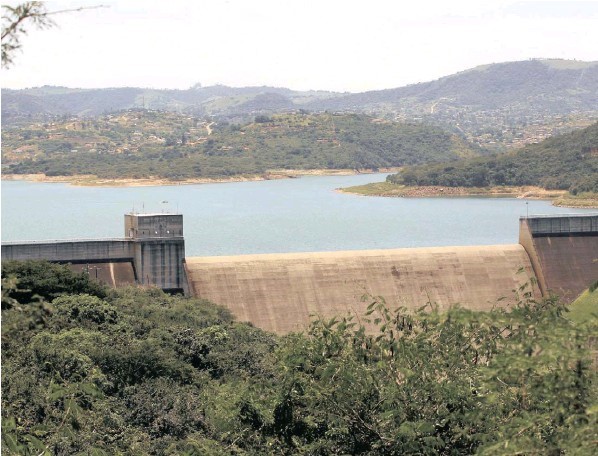 HEAVY rains at the weekend have not provided much noticeable relief to the region’s largest water system, say authorities.

The lower part of the Umgeni water system comprises six dams, including Albert Falls, Nagle and Inanda dams. The levels of four of these dams are lower than they were a year ago, while the remaining two are marginally higher than they were a year ago to the day. Inanda Dam, pictured, is at 62% of its capacity but was at 81% this time last year.
Umgeni Water spokesman Shami Harichunder told The Mercury yesterday that the system, which served four million people in uMgungundlovu District, Pietermaritzburg and much of eThekwini, remained under stress because of the drought.

“The system in question comprises, in its upper part, Mearns Weir, Spring Grove Dam and Midmar Dam. The lower part comprises Albert Falls Dam, Nagle Dam and Inanda Dam. The levels of four of these dams are lower than they were a year ago, while the levels of the remaining two are marginally higher than they were a year ago to the day.”
Spring Grove and Mearns, he said, were small dams that emptied out as quickly as they filled up.

“Mearns is overflowing as a result of good rains in its catchment area, which is Mooi River and the Drakensberg. Water from Mearns Weir ultimately makes its way into the Tugela River. Rainfall received in Pietermaritzburg and surrounds during the weekend of January 5-8 had no impact on the levels of Midmar, Nagle and Albert Falls dams as it fell outside the catchments of these dams.”

Water scarcity in the Umgeni system, he said, was a result of a prolonged period of below-average rainfall in the major catchments, culminating in the major dams, Midmar and Albert Falls, being at low levels.

Midmar Dam had been stabilised at mid-50% through the transfer of water into it from Spring Grove Dam, as well as some rainfall.
“Of great concern to Umgeni Water is the level of Albert Falls, the largest dam in Umgeni Water’s operational area. Water is normally transferred into Albert Falls from Midmar, but application of this rule has had to be stopped because of inadequate water in Midmar.”

“Mandatory water restrictions of 15% have also been implemented in uMgungundlovu, Pietermaritzburg and greater Durban – the areas that receive water from these water treatment works.”

Areas of Durban not affected by water restrictions were in the far north of the city. These areas were supplied by Hazelmere Water Treatment Works.
Water rationing and restrictions, he said, were implemented as a strategy to prevent the possible drying up of Midmar and Albert Falls dams.